Dying for red: How to dye yarn using food coloring 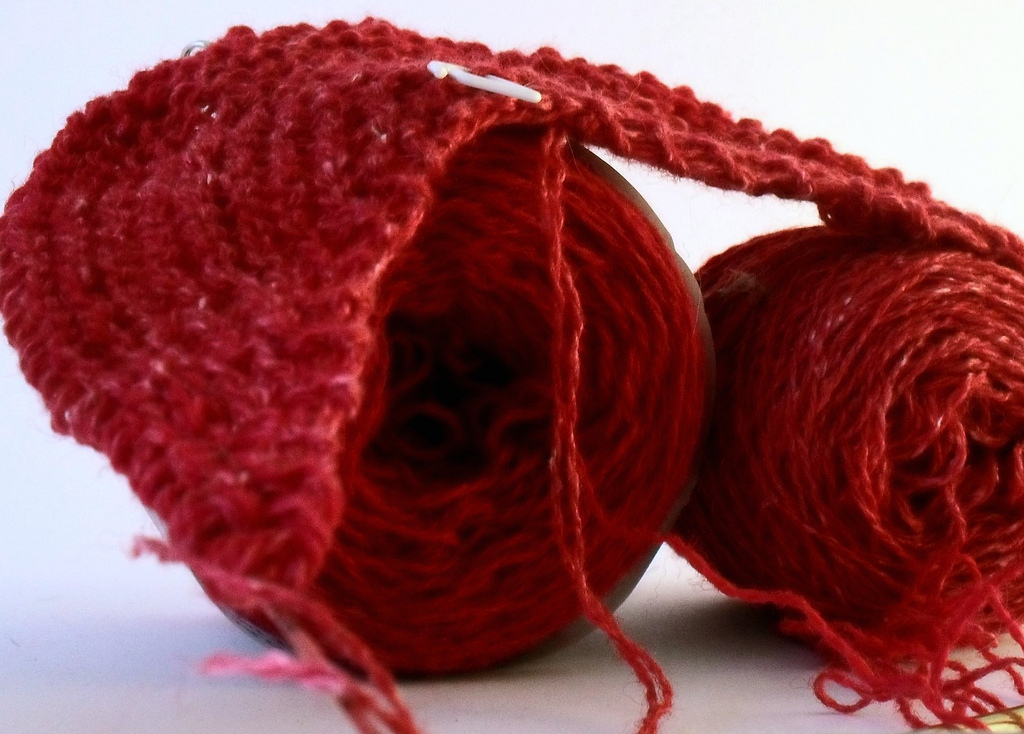 So I want to make myself a second Camomille.
One in red.
But not just any red.
It has to be the perfect shade. Plenty of red yarns. And none are just right

But I did find the perfect colour and weight. It’s this colourway called Carmine. But. It’s out of stock. I e-mailed to see when it would be back, but there is no telling when. And I still really really want to get this project going (the boatneck will very soon be too big and complicated to bring along to conferences and meetings – and really, that’s where I knit these days).

So I decided to try and dye some yarn using food colouring, and see if I can get a good red that’s close enough.

I have this undyed sock yarn in a drawer. It’s a very basic yarn, that I got at the supermarket during a sale some years ago for less than 0.50 € a skein. So I got plenty to play with. I set up the swift, skeined the yarn out and tied it with contrasting cotton yarn (cotton wont take the dye, so I’ll be able to see where it’s tied).
Then I filled a bucket with lukewarm water, added a good slug of cheap vinegar and let the yarn soak for an hour.

In the mean time, I got the dyes ready. I’m using Wilton’s Icing Colors, which I got at a speciality cake shop in Copenhagen. If I had easy and affordable access to Kool Aid I would probably have used that. But I don’t. I used the Christmas red and the black to get a darker bluish red. For 100 g of yarn, I used about 6 ml of dye. I mixed the dye with a little bit of vinegar and topped up with hot water from the tab. Then I added the dye and more hot water to a plastic bowl (that’ll go into the microwave oven) and then the yarn. I then cooked the yarn in the microwave for 2 minutes, let it rest for 2 minutes, cooked for 2 minutes etc. until the dye was absorbed by the yarn and the water looked clear (the first batch took 6 minutes, the  second 8 minutes of cooking). The water is now clear

Then I’ve let the yarn cool, rinsed it in lukewarm water, wringed it carefully (I don’t want it to felt) and it’s now hanging to dry. The second batch (in which I used more black than in the first one) looks very promising. But I won’t know until it’s dry and I can look at it in daylight.