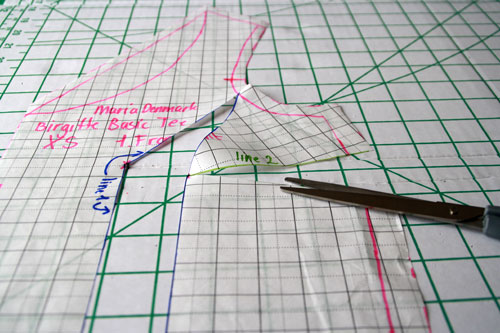 The great thing about sewing is that we are all designers and we are all able to get clothes that fit us well and make us look and feel even better.

But yet many people just sew up the patterns straight out of the envelope (or printer, as may be the case) with out enjoying the possibilities for individual fitting. Some may not do it, because they don’t know how.

SO I thought I would do a series on fitting and altering different kinds of t-shirt.

While there are many ways to fit garment and almost as many books instructing how to, most of them merely talk about fitting woven fabric garments. And while I’m a big fan of tissue fitting, it just will not work with a pattern with no or even negative ease. So here is my tried and true way of fitting t-shirts.

First I’ll talk about the Full Bust Alteration, since it is an alteration which has an enormous impact on the over all fit of the t-shirt.

Most patterns companies (MariaDenmark included) draft for a B-cup bust. I am not big busted (I wear a C cup bra), but even I have to do a FBA on my top patterns if I want them to fit great on my shoulders and back. I might measure 90 cm (which would put me in a size S) around the bust. But in reality my back and shoulders have the width of the size XS – the extra cm are “used up” by the bust, which means that a S will be too big around the shoulders and back, and will probably not fit properly over my bust.

These pictures (of the same pattern – one made in a standard size S and one made in XS with a FBA (+ a bit added to the side seams) show it well, I think.

To determine which size to sew, I take my High (or Upper) bust measurement. This excerpt from the Palmer Pletch book also shows (and tells) about the difference between full bust and high bust.

I started by tracing the pattern of the front piece on to tissue paper, this will make it so much easier to handle doing cutting and re-taping. I traced the pattern on to tissue paper – the broken lines marks the seam allowances. I’m ready for my t shirt FBA

Then it’s time to determine where on the pattern the apex of the bust is (we need it for the next step). In woven shirts this is a lot easier, mainly because I know the measurements for the pattern apex, or can try the tissue on, but with the stretch in the knit fabric, this wont work. So I’ve done this totally non-scientificly by trying on a bunch of different t-shirts, pinning where the apex was when I wore them, fold them in half and measure from the Centre Front. Then I have come to the conclusion that for me it works if I go about 2.5 cm (1″) down from the under arm and find a point that is 3/8 in from centre front. This might work for you too. Determining the bust point for the T shirt FBA

Now I draw the lines which are going to work as guides while I add more room to the bust: Line 2 goes from apex to the side seam (I don’t know how far down it should go – I just imagine where my dart would be).

Line 3 is placed on the centre front side of line 1, perpendicular to line 1. I like to put it just above the waist line. Anchor the pattern piece with pins – I use a cardboard cutting board to pin in to (and align the centre Front line with the line on the board), but you could also use a folded out card board box or an ironing board. Spreading line 1 – and anchoring with pins

To determine how much room to add to the front piece (i.e. how much to spread the paper apart), I calculate like this (again, this is not scientific, but it works): The size I’ve cut is meant for a 84 cm bust. My bust is 89 cm – so I need 5 extra cm. Since the front piece represents half of the front, I’ll round down to 2 cm – to count the stretch in (5 divided by 2 is 2.5).

I add this by spreading line 1, making sure to keep the two edges of it completely parallel. This makes line 2 spread open (as to form a dart) and also creates a small fold in the arm hole seam allowance. And it’ll make the hem uneven. We’ll deal with the hem and the dart in a minute, and we’ll just tape down the seam allowance fold. It’ll be fine.

To make the hem even again, I cut line 3, and slide the bottom section of the centre front side down until the hem is even again (that’s why I like to do it above the waist line, it’s more lines to align with). Remember to anchor it well.

Now I’ll fill in the gaps with new tissue. Just slide pieces in and tape from the top. Adding tissue – except for to line 2

I don’t add tissue to the dart formed by line 2, and here is why. I don’t want my t-shirts to have darts – and I don’t mind the little drag lines that you can see in the picture of the striped shirt. Now. If you have made a very big FBA, you might want the dart, and in that case – leave it there. Fill it out with tissue, mark it on your fabric and sew the darts before you sew the side seams.

UPDATE: I’ve changed my ways around getting rid of the bust dart and now I do it like I explain in this article: How to: Removing the bust darts.

That’s it – that’s all there is to it. It’s much faster and easier to do than it looks – and it makes a lot of difference. Not only to woven fabric garments, but also to knit fabric garments!

Give it a try!

FIT(TING) TO A TEE.. changing the neckline

FIT(TING) TO A TEE (the forward shoulder alteration)