Trousers Fit-along #2: Crotch curves and getting ready for tissue fitting 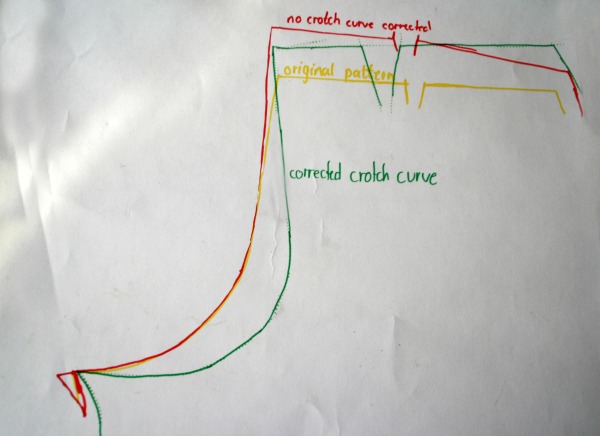 We are ready for part #2 of the trouser fit-along. I do have some photo problems, though, and I will add (new) photos as soon as I can!

Right. Crotch curves and Body spaces. This can be a somewhat controversial subject – I have heard people getting really angry about other people using this method (and if you feel like that, by all means, skip this post!), but here is my take on it. I apologize in advance for any explicit language (I try to be careful not to use it, but I might not be up-to-date on what is appropriate language in English..)

I have been using the tissue fitting method for trousers for some time, and while I have always gotten very nice results – and trousers that looked great, I always felt that something was not quite right in the back crotch. I could feel it when I sat down. I had lengthened the back crotch like you should when you need more length (we’ll come to that in the next post), but somehow my bum always seemed to be pulling the fabric so that I almost ended up with what  around here is referred to as “plummer’s crack”. I think you know what I mean…

Here is be a photo of the same pattern fitted using the two different methods + the original pattern (the yellow lines).  The one fitted using the tissue fit only method is the one in red, and the one in which I also used the flexible ruler to determine my crotch curve, is in green. The back crotch length of the red and the green is the same (give and take half a cm), but  the length is in different spaces. This is where the ruler/tin foil comes in. It helps you to curve the length in the right place! Then one day I remembered having heard -and skimmed an article about the body space and the crotch curve. I dug out my flexible ruler from the pile of notions in which it had been hiding, and simply tried it on while wearing leggings. I then placed the ruler on the back piece of one of my patterns. And the crotch curve looked like it didn’t belong there at all. SO here’s the thing. This crotch curve is probably not for a beginning fitter. There is a lot of intuition involved, because you don’t just want to copy your crotch curve, you want to use it as a guide to shape the crotch curve on the pattern. But I don’t think it’ll hurt if you try anyway. You can always go back to your original pattern.

Have a look at this picture The pink curve is the original pattern line (size 36). The green is where my crotch curve is (the line in pencil is where I placed it when I didn’t have things lined up correctly). Huge difference! But it totally explains why my trousers were dragged downwards!

As I mentioned before, you can get very nice results with out tracing your crotch curve. But for me, it really changed everything – and it actually makes the rest of the tissue fitting much much easier.

Today we’ll alter the pattern to correspond with our individual crotch curves and also we’ll get the pattern ready for tissue fitting.

Got everything? Okay. Here we go!

So. Your mission is to trace your crotch curve and to compare it with your pattern, then alter your pattern if needed.

~ Get your flexible ruler or a lot of tin foil. If you are using  a ruler, place a piece of rubber band somewhere in the middle of it (you can move the rubber band to set the place for the in seam). You can also add rubber bands at each end to place at your desired waist line front and back. But I don’t find this a necessity – as we are using this as a guide and not to copy exactly! If you are using tin foil, tear off a long piece and crumble/mould it into a heavy string. I have not been happy with rubber bands on tin foil, but try it, or just use a marker to mark where your in seam goes. Wear leggings and place the ruler or foil at your crotch curve and mould it in place, then slowly step out of it and place the curve carefully on a piece of tissue paper. Trace that curve onto the paper. I usually repeat this step 3 times, and end up having a curve that is a good average of the 3.

~ Place your front and back pattern pieces on a table in front of you, make them meet at the crotch point and overlap at the in seam. (The pieces will overlap at the legs. That’s okay). Something like this: ~Now place your traced crotch curve on top of the pattern pieces, and compare. What do you see? Is it close enough? Do you want to change the lines of either the front or back crotch lines, or both? Pencil in where (if) you want to change it. But remember. You are not committing a crime here. It is also not irreversible. No pattern is set in stone. It is really just my interpretation (if you are using my draft) of the average crotch curve, and I’m a perfect example of not being average in that department… So go ahead. Sketch what you think would be a better curve for you (it’s okay, we’ll do the tissue fitting later and get the details fixed!) When you are ready, take a marker and mark the new crotch curve. Don’t cut the pattern, just draw on top of it.

~If we have taken away a lot of fabric (like I did in the picture above), we need to add the same amount for the trousers to still be able to get around the body.

Have a look at this picture again. See where I’ve added some green curves at the side seam? This is what I’m talking about. Add approximately the same amount that you took away. I ended up tracing my pattern following the pencil lines, and took in a lot of the peak in fabric (I need a better pic to explain this).

~Next step (now that we have modified the crotch seams) is to trace the altered pattern pieces  onto tissue paper. Go ahead. Make sure you have space around your pattern pieces – especially at the side seams and waistline. Just trace the front piece (with the pocket facing attached) and the back piece. We’ll get to the waistband pieces later on. And that’s it for today.

Getting ready for the TROUSER FIT-n-SEW-ALONG